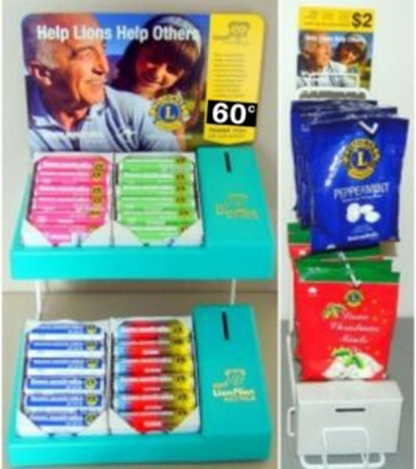 We have various Clubs including Maroochydore RSL, Alex Suncity Ten Pin Bowling and other retail outlets that sell Lions Mints,.

This program was established in 1976, by the International Representative Lion Jim McLardie as a Multiple District Project – a peppermint candy made by Life Savers Australia Limited.

A new formed private company, International Mints Pty Ltd which then took over the warehousing and distribution of Lions Mints manufactured by Nestle Australia Limited which is still held by Nestle to this day by virtue of their acquisition of Life Savers in the early 1980’s.Th only change has been in the range of confectionary offered to Lions Clubs with the addition of Fizzers and Musks.

In October 2002, Nestle moved their confectionary and manufacturing to New Zealand in order to rationalise this side of their business aimed at keeping costs down.

The funds available from the sale of Lion Mints over the years have been a great financial boost to clubs for Community work.

The following have received significant funds raised by the program: